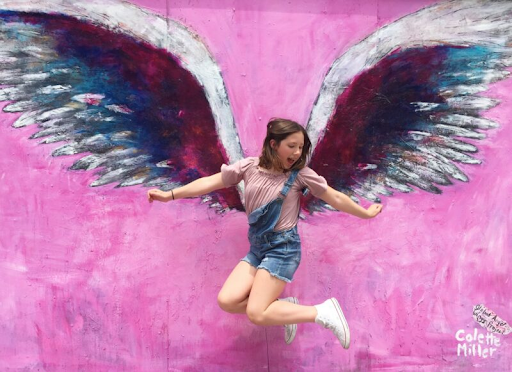 The mural chosen features a picture of Muehlberger jumping in front of a painting of wings.

“It looks like the wings are connected to her and she’s flying,” said Bryan Muehlberger, father of Gracie. “It was just sentimental; now she’s an angel in heaven, and it really touched us.”

When the Muehlbergers contacted Collete Miller, she immediately agreed to create a mural in memory of the late Gracie.

“When they [the Muehlbergers] reached out, I think I cried,” said Miller. “I saw the picture. They requested these colors, and I think it’s perfect. Gracie symbolizes, to me, this innocent, young girl in pink, you know, carefree and really not afraid of anything — just like how she’s jumping.”

The mural is on a wall near the entrance of the school, with the painting of the wings and a poem by Gracie Muehlberger which reads,

“You only have one life to live, so why not live it great, real and fill it with memories and experiences.”

Alongside Gracie’s, a Spongebob Squarepants mural is scheduled to be made in honor of Dominic Blackwell, another victim of the shooting. He was known to enjoy the animated series, and the mural is meant to represent who he was.

These paintings are a part of a new program, “The Global Angel Wings Project” started by Colette Miller. The program’s goal is to remind people to be kind and act as angels on earth would.