THE SMOKE SIGNAL • May 16, 2020 • https://hartsmokesignal.com/4030/opinion/lockdown-protesters-are-an-example-of-white-privilege/

Lockdown protesters are a clear example of white privilege in America 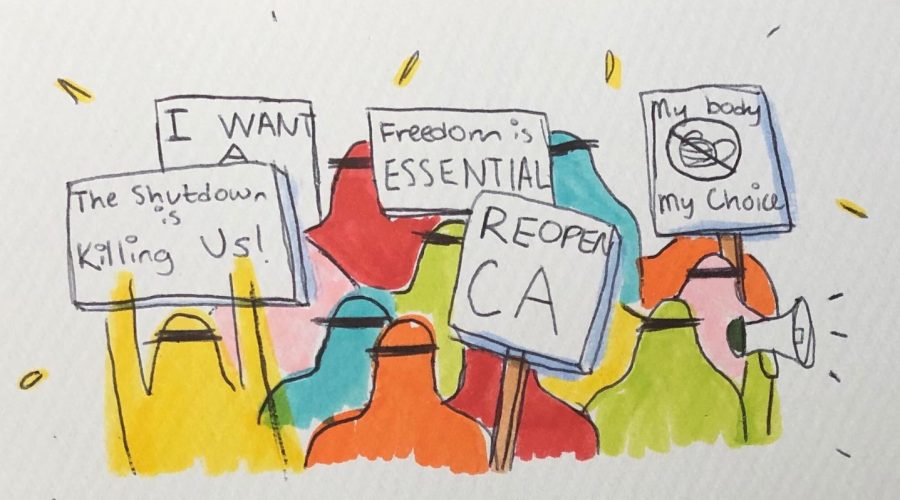 Protests against the Stay at Home orders have emerged throughout the United States and California. These protests have occurred in Santa Clarita on a small scale, but they are occurring on a much larger scale in Orange County. Citizens stormed the streets of Huntington Beach demanding that Governor Newsom reopen California, with a majority of protesters not wearing masks.

But where is the tear gas and the rubber bullets that are so often seen at Black Lives Matter marches and peaceful POC protests? Where are the arrests made? What makes these protesters any different from others, why do they deserve to be treated this way by law enforcement?

The color of their skin plays a large role in these protester’s privileges. The majority of these protesters are white and carry signs in favor of the Republican party and Trump, shouting about freedom and how hairdressers are “essential.” These are people that have the privilege of being able to stay home and socially distance themselves during this time. Yes, quarantine may be a disruption from daily life, but these protesters see this temporary inconvenience as oppression. They see the stay at home orders as infringements of their rights, and are demanding that their freedom is returned. Trump has encouraged these actions, turning to Twitter to call to “liberate” states. These actions taken by him only endanger our country more by promoting gatherings where people disregard social distancing and do not wear masks.

In Ferguson, Missouri, protests against the killing of Michael Brown by a police officer resulted in the use of tear gas, smoke bombs and rubber bullets against groups of mainly black protesters in 2014. Unarmed Native American protesters at a rally against the pipeline that would cut through their sacred land and harm the environment were met with rubber bullets, police dogs and pepper spray. Yet, at recent protests, no such action is seen. Videos are seen showing protesters screaming in the faces of law enforcement and some even bringing guns to protests. The fact that peaceful POC protesters have been met with violence from law enforcement while white protesters with guns standing on the steps of state capitol buildings are met with no police action demonstrates the white privilege that these protesters have and the double standard that is set here in America.

When POC protests are violent, they are criticized by the media and met with police intervention. When POC protests are peaceful, they are still criticized by the media and met with action from police. If someone of color stood on the steps of a government building holding a gun and wearing a bulletproof vest, they would be arrested. It wouldn’t be seen as an act of patriotism, that person would be seen as a threat. Yet, no arrests have been made at lockdown protests. There have been no instances of rubber bullets, pepper spray or smoke bombs. Protesters, some armed, stormed the capitol building in Michigan to protest the lockdown and were met with no brutality from police.

These protesters have only been able to protest because of everyone that has practiced social distancing due to the Stay at Home orders. Social distancing has helped slow the spread of the coronavirus, minimizing the effect it has had on the United States. But if people continue to protest the Stay at Home order and disregard safety measures recommended by authorities, the number of cases will multiply. And cases have already increased. LA county has seen an increase of the number of cases and deaths, and states like Kentucky and Ohio that have had several protests against the lockdown are also seeing increases in cases and deaths.

These protests have also raised another question: Where are the Blue Lives Matter people? When the Black Lives Matter group was created in order to protest police brutality, people, mainly more right-wing and white, started #BlueLivesMatter. Yet, this same group of people are seen screaming in the faces of police and disregarding laws set down for their safety, showing that their movement was never about concern for police officers, it was about opposing the protests of the black community. Nothing has been said about Blue Lives Matter now that the ones who supported that movement are now protesting against the police.

Like the majority of people who acknowledge and agree with this, life will return to normal when it is safe. The safety of the people is what most of our government officials care about, not detaining people from their rights. These protests are backpedaling all the work that doctors, nurses and other frontline workers are doing to prevent the spread of the virus. Chanting “USA” will not do anything to prevent cases from erupting. Protesting against the Stay at Home orders is not fighting for freedom, it’s not patriotic.