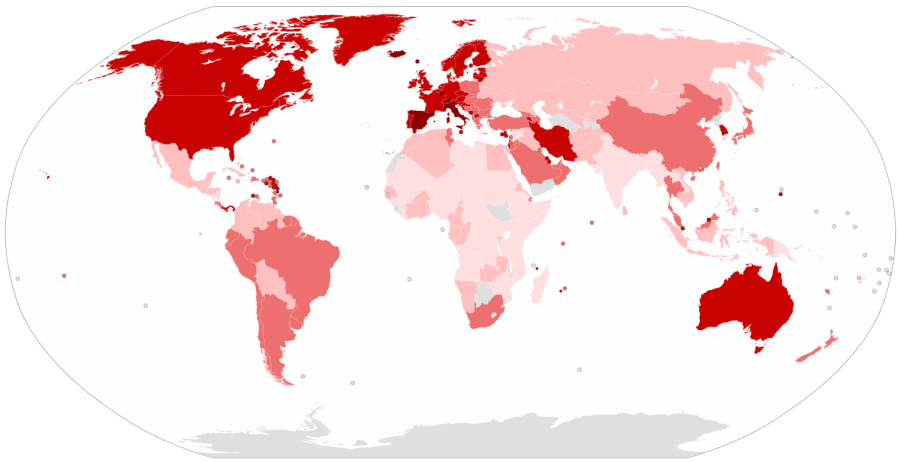 The darkest countries indicate the most amount of cases.

COVID-19 is still active throughout the world, with new information being released daily. This week, there has been an increase in cases throughout the world, and an increase in the amounts of deaths. As of March 27, there are 597,267  confirmed cases, 27,365 deaths and possibly more with many people around the world awaiting test results, as the current tests being administered take days to provide results. Although, a new FDA approved 15 minute test has recently been authorized for use.

Many countries have increased precautions in order to cope with the effects the virus is having on their populations. As of now, almost one third of the entire world population is under coronavirus conditions. Madrid’s regional government is preparing to open an improvised morgue in the next few days to increase the city’s capacity to deal with the growing fatalities of the virus. Ecuador’s western city of Guayaquil, one of the hardest hit by coronavirus, is also planning to build a mass grave as the government predicts an increase of deaths. Taoiseach Leo Varadkar announced Friday that the Republic of Ireland will enter a nationwide period of lock down as part of new measures to tackle the spread of coronavirus. According to National Health Service Chief Medical Officer Simon Stevens, the UK has converted multiple conference centers into temporary hospitals.

The World Health Organization announced on Friday that the first patients enrolled in its Solidarity trial, which will examine potential treatment options for Covid-19, will be based in Norway and Spain.

“We are delighted to announce that today in Norway and Spain, the first patients will shortly be enrolled in the Solidarity trial, which will compare the safety and effectiveness of four different drugs or drug combinations against Covid-19,” said WHO Director-General Tedros Adhanom Ghebreyesus.