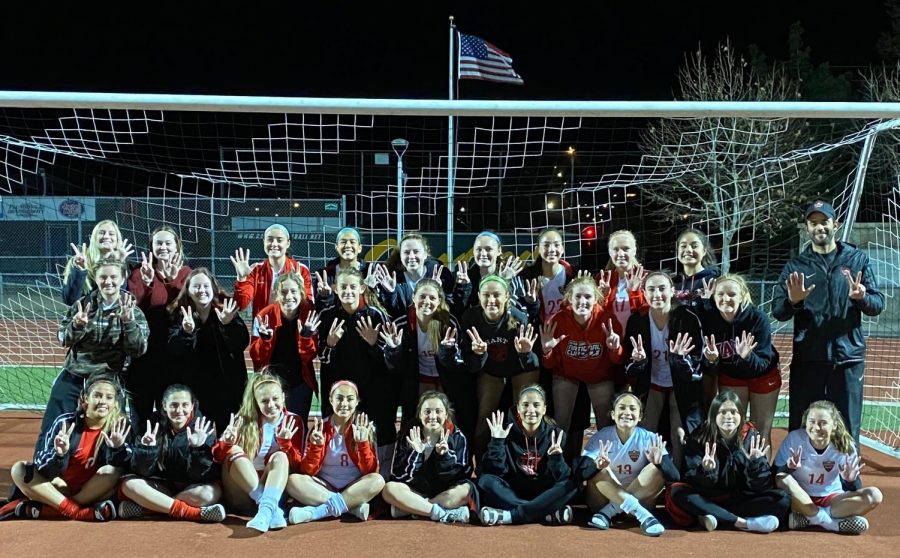 Many people can agree that Hart’s varsity girls’ soccer team has quite the reputation. The girls have been undefeated league champions the last seven years, meaning that they have not lost a league game in now 70 consecutive games. With that, every year adds more and more pressure for the Indians. However, the team has stayed calm and kept their streak going.

This season, the girls had a record that greatly surpassed their league competition for the first four games. Beginning with an 8-0 win against Golden Valley, Hart made quite the statement for their 2020 season.

The high scoring games continued against Valencia later that week in the Vikings own territory. A 5-1 win, with Valencia’s only goal being a penalty kick, set a precedent for the intensity of league.

Canyon, however, limited Hart to only two goals, with varsity keeper Aubrey McKessey making some crucial saves for the Cowboys.

Two days later, the team played West Ranch at Hart. The game ended with two goals from Sarah Melvin at the end of the second half to bring the final score to 5-0.

Going into the Saugus game January 21, Hart was the team to beat. Last season they won all 10 league games, which hasn’t been done in over a decade, and the Indians were striving to repeat the same outcome. The Saugus match was at the Centurions’ home field and the competition was fierce. With both crowds screaming and cheering loudly throughout the entire game, everyone was on the edge of their seats. Alyssa Irwin barely found a way to get the ball into Saugus’ net about halfway through the first half, but they were not able to secure the lead. Saugus bounced back with two goals off of rebounds from first a cross, then a free kick, that put them at a 2-1 lead over the Indians by half.

With their reputation on the line, the Indians showed their dominance in the second half. They seemed to keep the ball out of their half for most of the time and a free kick from Jessica Deegan found Irwin’s head which senior Sarah Melvin then was able to head into the goal to tie the game. Unfortunately, no further goals were scored as the Saugus keeper made some very crucial saves.

Going into the second half of league, the Indians still kept their undefeated streak, but lost their chance of winning ten consecutive league games.

The Indians struggled to score against Golden Valley, who was heavily sitting back, playing little to no offense the entire game. Finally, at the end of the first half, a goal by Delaney Schamber put them in the lead. They were able to regroup and scored three more goals in the second half, but a last minute goal by one of the Grizzlies ended the game at 4-1.

Their second run against Valencia, the Indians won 2-0 in a very back-and-forth game.

Canyon posed quite a threat once again. The Cowboys dominated most of the first half, but Hart still managed to score by the end of the first half. This was followed by a second goal from the Indians in the second half, but nothing was secured. Canyon found a goal later in the game to put the score at 2-1.

With that win, Hart secured first place in league with still two games left to play. They were nearly untouchable.

Two more victories against both West Ranch and Saugus ended Hart’s reign in league with a record of 9-0-1.

Hart has not lost a league game in seven years, and with these past ten games added to their belt, the girls continue to boast their reputation as they head into division one CIF this week ranked as the ninth seed, where they will be hosting Centennial High School from Corona Thursday, February 13.